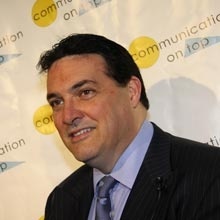 In any merger acquisition basically the formula is one plus one equals three. You’re trying to become better and stronger and oftentimes in these kinds of scenarios organizations lose sight of the fact that reputation is built inside and that you have to pay particular attention to your employees on both sides – the acquirer and the acquire and make sure that throughout the process they understand exactly what the value proposition is. So we’re going to talk a little bit about that and about some of the missteps organizations tend to take.

When organizations come together, or at least try to, and they don’t take particular attention around what their reputation is, and again, the reputation is how they’re basically projecting themselves to the outside world and that has everything to do with how the internal world feels about the organization. Then what they do is they lose the whole value proposition for coming together in the first place. And so their earnings can be affected, certainly revenue and sales, profit margins, but more importantly customer service, brand id, things of that nature, so going into it they may be strong, but not paying attention to it, they may come out of all of that in a weakened state.

Look, reputation is a multidimensional thing. The thing that you have to pay attention to, quite frankly, is do your own employees and the employees that you’re going to be bringing on board understand exactly what the future looks like, or can look like, by merging or having these two organizations come together in some way, shape or form and if you can focus on that and allow people to basically create the future, then you’re not only protecting your reputation, you’re protecting the ability growth. I think that’s really the key aspect that you have to pay attention to.

If you look at over the last ten or twenty years, I think you’ll see the Time – AOL merger did not work out. AOL has subsequently been on and off. Similarly with Daimler- Chrysler. Both went into it feeling that it was a merger of equals, when in fact it wasn’t, they were actually acquisitions and the value of both of those transactions dissipated over time.

If you look at what Pfizer and Wyeth have done in the States, I think it has been certainly a successful merger and I think the difference is they went into it at the outside realizing what it in fact was and in the Daimler- Chrysler case and Time – AOL case I think that they tried to position as a merger and in both cases as I said it was an acquisition, so the rhetoric didn’t really match the reality. So people were left, particularly employees were left with ‘well I thought I was going to be a part of this and in fact what you’re doing is just putting your culture on mine.’ Or in the fact of Daimler, having the Daimler culture trying to dominate the Chrysler culture and it didn’t work and we saw what happened. I think if you look at the successful mergers and acquisitions you’ll find that the first question they ask themselves is ‘is it a merger or an acquisition?’ It may seem to be a very easy question, but it’s a very profound question, because once you identify that it is a merger, then you can basically identify what the rationale was for it and then people have an expectation for what the merger is. If you say it’s an acquisition, people have an expectation of what an acquisition is and the former is more of maybe I have a chance to help create the culture and the latter, you probably don’t. It’s probably: we’re going to put our policies, our practices onto your business. There’re maybe some isolated areas where we might look at what you’re doing and say ‘hey, maybe that’s something we should adapt,’ but for the most part it’s going to be our situation.

You know, I think the biggest personal achievement for me over the past year probably has been in the area of recognizing the value of communications in new and different areas, particularly around risk management and things of that nature. You get into this profession and you look at it in many ways in a very myopic fashion and then as you experience different things you begin to open up and see that communications can really touch and impact so many different parts of the business, it can impact so many different parts of society. I think over the past year I’ve been getting more comfortable with how deep strategic communications can be and also organizational behavior, how deep it can be in terms of societal understanding. I think over the past year I really tried to become more open to those areas.”

To me communications is relationships. You know, at the end of the day, the more solid a relationship is, whether it’s in business or in your personal life or your marriage or whatever, the better it is for you to get things done, because once that happens there is a level of trust that’s formed.

Do you use Twitter, Facebook?
I do, I have to do it more. I don’t use it as much.

If you could tweet right now, what would you tweet?
I would tweet that I’m in a beautiful location with a group of people that I’ve known, some of them, and have a high deal of respect for and I’m kind of excited about what I’m going to learn.

I think it’s just new knowledge. Every time you come to events like this and sessions like this, you’re looking to get new knowledge. A part of this is that nobody has the answer. None of us has the answer. What we have are our perspectives and points of view, so the more you can associate yourself with different perspectives and points of view, the smarter you are. So that’s what I’m looking for.