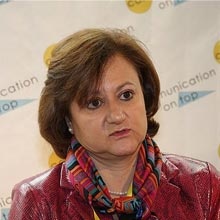 Interview:
We live in a very complex communication world in the EU – we are communicating on behalf of a number of governments that agree on certain decisions that need time to be taken. The legitimacy comes from the local, but the problems will only be solved in a global manner. We have always to be balancing these two angles – proximity and the global. The EU can help, can encourage, can be present, can be visible, but we are at the top and the citizens are at another level. Their daily contact will not be the EU as a structure; the daily contact will be the public opinion leaders which are in their communities, the governments which are local, and the leadership in their individual countries.

Communicating to the different constituencies of the EU is a challenge. We have a number of issues: language (many different languages), secondly, public opinions are different: a country like Finland or the community in the UK or another community in Spain do have different priorities in terms of their daily lives, so we have to be always balancing what is the global message and what is the specific perception of the global message. I am very fond of adaptability and trying to target specific messages for the specific communities, but without forgetting that now we live in a global village, and what you say to a specific community is always heard and maybe understood differently by another community.

Presentation:
Comment: If EU organisations focused on messages, very simple messages, that would help promote the EU.
Reply: Excuse me, but there are no easy answers to complex questions, and sometimes not event to the easy questions. You are demanding a clear message to a complex situation, which entails national sovereign decisions that are of member states that can only be put together after a long process of exchange of views: ministers, head of the state and government, companies, types of organizations that we have. We would probably be more understood, more legitimized and better liked through action, than thorugh easy messages for very complex decisions.

Interview:
And the best way is action. I think the best manner to promote the EU is through the activities and the policies that the EU agrees and implements. We are not just going to have the people live in Europe for the sake of Europe. We are going to have people liking what the EU does, because it does a certain number of things, and it has an approach which is positive and which is perceived as being effective. The best manner to face this type of jobs is to be very active and to be very engaged, and to believe in what you do. I have been, for ten years now, for example, talking about the role of the EU outside the EU – in the promotion of stability, in solving crisis, in helping people out of difficulties, or in getting societies closer to the EU, for example in the Balkans, or in the Middle East, or with the people in Iran, etc. My first light-motive has always been accessibility and at the same time ensuring that everybody knows there are a number of countries which have joined together to do good. I think one of the biggest benefits of the last few years in terms of stabilization and, in particular – development of the countries nearby the EU, has been enlargement. We now see economic progress in many countries which would have been more difficult than it is, if those countries had stayed outside. I only see progress in the Balkan countries, for example, that enclose into the European Union. I only see progress in having tighter links between the EU and Russia, the EU and Ukraine, the EU and even Belorussia. Europe cannot stay as it is – a closed club, or a closed group of countries, it has to be open. What we have to aim at is to ensure that we can be open and we can get closer to, in particular, the people.

Presentation:
Last week in Brussels, on Wednesday, commissioner A., whom you know well – he is in charge of economy, and as of next week, he will be in charge of competition policy in EU – gave about an hour long press conference, extremely explanatory, accurate, and the main objective was to ensure that what he said did not upset the markets, which were all watching how to pinch down the Euro in particular, because that was a message to reassure on the Greek situation. And he made, in probably 2 sentences (generic, loud) some relationship between the Greek case and specific aspects of the Portuguese case, and the Spanish case. And now we are reassuring messages went through a pipeline of the – I’ll say it in French – “La Tritureuse”: the machine to chop down, and I can tell you that the 6.down the market in Spain and then 9.down the market in Portugal and many of the places in the EU were, basically, originating in these two sentences, in the manner they were reported. We are shaping our relationship with the media and with the citizens through very simple stereotype messages, which… well, the world is not like that.

Interview:
So there are a number of difficulties, and differences between all of us. But I think what matters is what unites us all, which is: a set of values, and a number of attitudes, which make, what we call, the European way of doing things. With all these ideas travelling around the world, what I have perceived from the outside world is that they believe more in Europe than sometimes we the Europeans believe in ourselves and this is, probably, something that we have to put in value, because the European way of life, the European way of doing things, the European attitude is liked, is respected, and it is well understood, and sometimes it is more liked and better understood than other attitudes of other individual countries and this is something that we have to ensure that people in our societies know.

I’ll give you an example: for 3 hours ( a year ago) I organized a meeting with Mr. Solana and a good number of journalists form Iran. The aggressiveness of those journalists was really shocking to me at the beginning of the meeting, but after the answers were given in a polite, in a serene manner, we made lots of friends, lots of friends indeed. Some of them (during the crisis in June, when there were demonstrations and people being killed) send me SOS messages: "Please, tell Mr. Solana that this and this is happening in our country." So I think definitely this was an example that through communication and engagement we could tolerate some aggressiveness, if not all the aggressiveness around – we had people that didn’t understand what the EU and the international community was thinking about them, to become more familiar and to like and to be perfectly in line with our message.

The fragmentation of media is definitely better, but at the same time very complicated and makes life more difficult. Before, if I wanted to have a message across or I wanted to make an announcement, I would call BBC, or we would organize an interview with CNN. Now you have to call BBC, CNN, Al Jaseera, France Pancarte, and Russian television – all this media! And still, you have to ensure that it gets on the internet, you have to ensure that it gets in the print, so definitely fragmentation is a challenge. Fragmentation is good, if you are able to pass very simple and very specific messages, but we live in a very complex world, where passing simple messages is not possible, therefore it becomes much more difficult. So fragmentation is, somehow, a thing that we need to handle, it is not going to be like before, it will continue this way – maybe it will be even more fragmented because of what we need… probably, it’s going to do that. Therefore, we have to understand that is is what it is, and we have to be able to manage that.

I’m really pleased to be here, to have been able to participate in the launching. I hope I can get an invitation next year – I will be delighted to come, and I’m really impressed by all the work being done by the young generations coming from Central and Eastern Europe. I think this is basically the proof that all this process of stabilization had been successful and that, it’s basically, a good covering of Central and Eastern Europeans – all struggling in a very complex world and trying to make, through communication, Europe: a better place.

Yes, you have my blessing and I definitely will join you next year!